Or, the Invasion of the Fully-Equipped and Fully-Enclosed PTV

With the 2020 PGA Show still fresh in mind, particularly what was revealed in exclusive interviews with executives of the Big Three and a number of lesser-known brands, the following stands out:  First, lithium batteries are on a clear path toward mainstream awareness and acceptance; and second, telematics, communication between vehicles and between vehicles and data centers, will play a major role in future market developments.

For the present, however, let’s look at two aspects of current product offerings that play—and will play—an important role in consumer choice:

Let’s look at each of these topics in the following.

Another aspect of product evolution is the incorporation of automotive features, particularly in the driver/passenger space of the vehicle.   No longer, in many models, are such accessories as heating and cooling devices or sound systems simply add-ons or an aftermarket attachment.  Rather, this equipment is molded into the interior design of the vehicle.  Touchscreen LCD panels have become part of the interior design as well, giving driver and passenger access to a wide range of information or entertainment options.  New federal regulations, in fact, prescribe that LSV certification include backup warning signal and a rearview camera.

The impact of these options (or new standard features) is to weight the choice between PTV and automobile in favor of the former.  This assumes the transportation system is conducive to using low speed vehicles, which is the case in most gated or planned communities.  In suburban communities using PTVs will depend on local ordinances and practice and may take an activist approach to initiate LSV inclusion in municipal transportation plans.

Who are the pace-setters in under-the-hood upgrades?  The two big vote-getters in my book would be Yamaha with the first completely independent rear suspension, pictured below, and STAR (Sirius model) with its four-wheel hydraulic brake system, with front disc brakes, and its automotive-type front suspension. 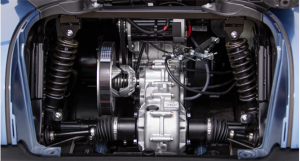 Yamaha’s rear suspension design, in fact, goes beyond what is found in most on-road automobiles, and replaces solid axles and leaf springs. Both sides of the dual axles are anchored in, and pivot from, the differential housing—and this essentially means that bumps and jars on one side of the vehicle have less, or no effect on the other.  In turn, this means far better roadability and control.

A second advantage to Yamaha’s new suspension is that it compensates for the loss of ballast provided by much heavier lead acid batteries, as compared to lithium batteries.  Oddly enough, Yamaha, as compared to its major competitors, Club Car and E-Z-GO, does not yet have a lithium-powered model on the market.  Given our conversations at the Yamaha booth, however, a lithium model is clearly on the radar screen. 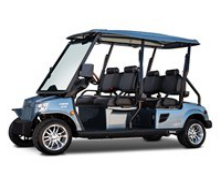 STAR EV and Tomberlin, for their part, may not yet have the market share of the Big Three, but their under-the-hood features put them out in front to some extent.  Both have four-wheel hydraulic brake systems, with front wheel disc brakes, and both have made a strategic decision to go for the low-speed vehicle market and feature models that are fully DOT compliant for this category.

Make the comparisons you need to get what you need

If you are in the market for a new  PTV (new or used), make the side-by-side comparisons for all the above vehicles on the Small Vehicle Resource website:  www.smallvehicleresource.com .  Using this website, especially designed to make vehicle comparisons, you can do searches by brand, model name, or by type of use or feature that is a priority for you, using the PowerSearch platform.

If, for example, you are interested in a PTV or LSV with between 10 to 19 horsepower, seating four, the brands will be Club Car, Columbia Par Car, and Tomberlin.  Drop the horsepower down to less than 10 and 41 models will pop up.  You can do all the comparisons– spec-by-spec, feature-by-feature—that you have time for.  A good way to spend your afternoon before venturing on to the showroom floor.

Are you ready for full-enclosure? 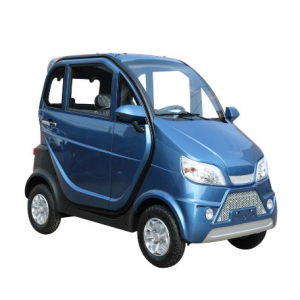 The 2020 PGA Show did not lack for variety when it came to wheeled vehicles, from what you might expect—golf cars and PTVs—to motorized caddies (of all sorts and sizes), to a fully-enclosed LSV.  The latter was represented by the Cheeta company.

Product evolution has yet to produce an enclosure solution that will take the PTV to the next level of automotive comparability.    Doug Ballenger, Dealer Development Manager for Tomberlin, indicated that his company was giving the enclosure issue serious thought and he ventured that the question that arises with regard to doors, is should they be half-doors or full doors or somewhere in between?

In a way of paraphrasing the issue, is the PTV an open air, fair weather vehicle with easy ingress and egress—or should it be more weather resistant and at the same time less open air and more restrictive?  The open air version answers to the PTV’s golf car roots and a traditional market in mild climates.  The enclosed solution readies the PTV for the urban/suburban mobility market.

Even in mild climates it does rain once-in-a-while, and it can get hot and muggy.  The Cheeta answers these issues.  Pictured above is the three-passenger Cheeta Runner, a fully-enclosed LSV.  Not only fully-enclosed but comes with all the bells and whistles to include heating, air conditioning, turn signals, Bluetooth, and backup camera.  Note the wide doors which allow easy access to both front seating and to the rear light haulage space.  The price tag is $6,100

Right now, Chinese manufacturers lead the way in the category of enclosure small vehicles.  China is, by far, the largest producer of LSV-type vehicles.  Put Global Sources in your browser and you should come up with the internet marketing site that features such vehicles.  Another example of a fully enclosed LSV is this vehicle from Weihai PTC International Co., Ltd. 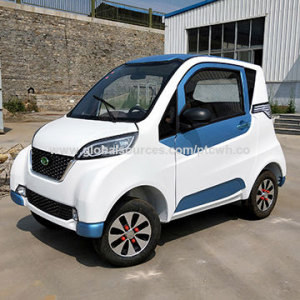 (Photo: Typical fully-enclosed vehicle from China. Is there a market in the gated community universe?)

It‘s not a golf car or anything like the PTVs we are used to inside our gated communities.  All else equal with regard to quality, would you be interested in such a vehicle, were it offered by a trusted dealer and had decent reviews?  Feel free to give me your answer at smetzger@smallvehicleresource.com .

My sense of where the industry stands now is that with lithium power and with the growing interest in urban/suburban mobility systems, we will see many impressive small vehicle innovations that seemed utterly far out and unlikely as little as two years ago.  PGA 2020 marked a watershed in that it marked the beginning of much broader markets for small vehicle—well beyond golf.

Year-End Thoughts and a Look-Ahead for 2021

What to Watch for in Golf Car-Type Vehicles in 2022: On-Going Demographic and Technological Changes Will Drive a New Market