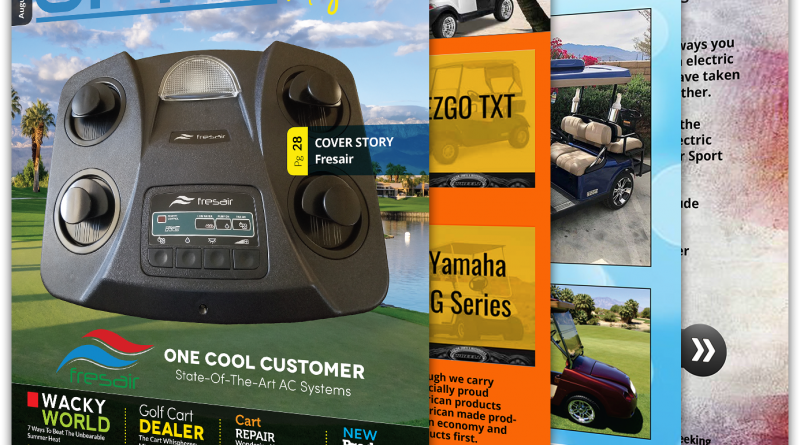 Cover Story
August 1, 2019March 17, 2020 admin
Founded in 2016 and based out of La Quinta in the Coachella Valley of California, Fresair was the brainchild of President Eric Schuckman and investor now CEO Gary Priest. In their third year and with sales doubling every year, Fresair is on track to revolutionize the world of air conditioning in electric golf cars.
We asked Eric how the idea for Fresair came about. “We saw a market for a product that was in high demand with golfers, course workers or even golf car communities for an air conditioning system that actually worked on golf cars. Previous products were rejected over time because they were poorly designed, inefficient and hard to use. With our new technology and sleek design, we are now able to deliver a product that is perfectly suited for the golf car application. We are really pleased with the positive feedback and accolades we are receiving from our partners and customers in the golf car world”, says Eric Schuckman, President, and co-founder of Fresair.
Unlike traditional air conditioning units that demand high power and run on a refrigerant, Fresair runs on regular tap water and is powered by the vehicle’s existing battery, drawing minimal power and providing cooling to the user of up to 40+ degrees.
The roof-mounted Fresair system is patented and works by forcing air through a moist fibrous organic pine filter, which is both anti-bacterial and anti-fungal. The filter is circulated with water from a separate hidden reservoir that is easily filled at waist height. The user simply needs to fill up the reservoir before heading out, turn on the unit and go!
The cooling effect is generated by evaporation and is triple filtered, feeling dry, unlike a typical “swamp” cooler or misting system. The unit itself is very slimline at only 3.7” tall but packs a punch with four adjustable vents and a smart control panel to control the system. It not only looks great but is also a completely green technology, even filtering dust and pollen out of the air.
So, why go with an evaporative system and not regular compressor AC? “The problem with regular air conditioning systems is that they simply draw way too much power to use on an electric vehicle. Th e only viable solution is an evaporative system and we have worked through several design iterations to create the Fresair S6, our current flagship model for golf cars. By using a high-efficiency motor and four adjustable vents that the user directs to their head and torso, we are able to create a cooling sensation second to none, whilst drawing minimal power and conserving battery life.” says Gary Priest, CEO of Fresair.
One of the early adopters and now Fresair partner Brian Rott, President and CEO of Cart Mart (authorized Club Car dealer) with locations in San Diego, Rancho Mirage, Orange County and Los Angeles, has been an advocate of Fresair since the beginning. “Meeting the needs for our customers is paramount in building relationships that last, so the idea of providing climate control when the heat spikes just makes sense. Reduce the temperature in the cart cabin by up to 40 degrees?? Sign me up! Who wouldn’t want to cut the heat by using a quality air cooling system? Our partnership with Fresair provides yet another custom
feature to offer our clients which enhances the user experience while improving the air temperature around them.” says Brian. Fresair has also continued to expand across the States and is now in many countries worldwide including Mexico, the Middle East, Asia, and even Canada. “Yes, they actually do get hot up there in Canada in the summer!” says Eric. “In the beginning, getting our product out there wasn’t easy. There had been products before that were simply flawed and we faced some skepticism. It was a case of just getting out there and letting people actually feel just how well it worked. In the early days, I even loaded my golf car on the back of my truck and took off on a road trip from California to Florida, showing the unit to every dealer and distributor who would listen! That early adventure helped us start some momentum building as word of mouth spread. It really is a product that has to be experienced to be believed now that we are being sold and installed by hundreds of dealers worldwide.”
So now what is next for Fresair? “We continue to expand our outreach to different territories and look for strategic partners, both dealers, and distributors. We are ramping up our advertising streams to get more of the general public aware of our product and they are directly approaching us in greater numbers. What we really need are more dealers to help the customer with the installation of the unit and we are actively seeking out more partners. For a skilled end-user, a self-install is possible but obviously not preferred and with more dealers out there the more happy and cool customers we’ll have. It’s a great extra revenue stream for dealers too and our best partners have had great financial success introducing Fresair to their customers, whether on new cars or retrofitting to existing cars. We are also now working with fleet managers of golf courses to install Fresair on all, or a portion, of their fleet in order to maximize their year-round revenue and entice players out to the courses even on the hottest of days. We have had terrific feedback from courses where they have seen an uptick of players coming back during the summer season.” says Eric.
For golf applications, imagine extending your playing season to all year round, even on the hottest days of the year, when the courses are empty and the rounds are cheap. It’s like having the whole course to yourself whilst playing in complete comfort!
Fresair can be contacted directly at (442) 282-1199, by email at info@fresair.com and more information and current dealer network is available on their website at www.fresair.com. 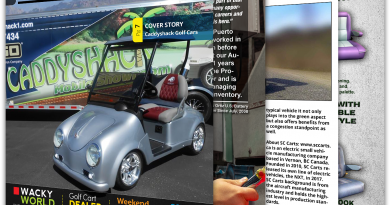 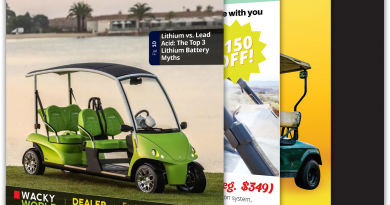