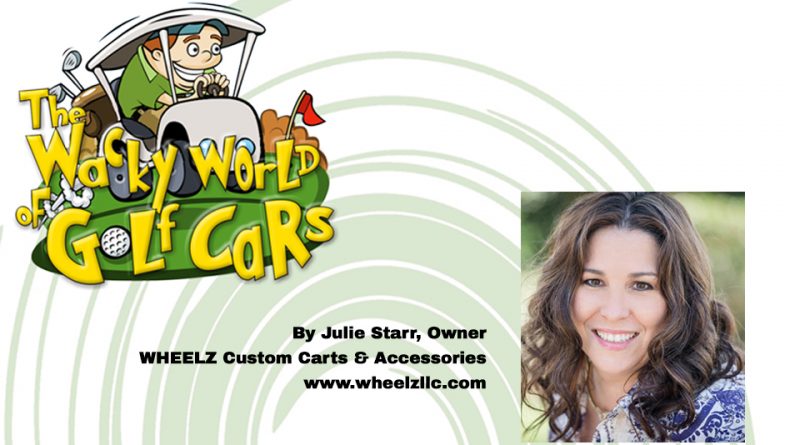 Drinking and driving your golf car may seem commonplace within your community. It may seem like no big deal. Golf cars have four cup holders and coolers after all, so why is golf car DUI getting any attention? You may be wondering how the topic of golf car DUI could possibly fill an entire article. Or why I would even want to write about it. I usually reserve my column for light-hearted, fun golf car stuff like parades and the best golf car communities. But, after reading about an especially gruesome incident of golf car DUI, I felt compelled to get serious this month.

In 2017, a man who was visiting his parents in their golf car community in Wildwood, Florida borrowed his father’s golf car. He went to a local bar and had several drinks. He left the bar with a woman he met at the bar and he planned to drive her home in his golf car. As they were cruising down the street, the woman fell off the golf car. The man stopped and saw that she was injured badly. He tried to lift her back onto the golf car, but was unable. He then decided to drag her to the median of the road and left her in the bushes. He drove home. Thankfully, someone saw her and called 911. Despite the medical attention she received, it was too late and she died a few days later. The man was charged with DUI.

A few days ago, a woman was sentenced to probation, a suspended license, and 50 hours of community service after being arrested for DUI on her golf car. She was driving her golf car in her community at 1:30PM when she hit a curb four times in front of a police officer. She failed a field sobriety test and admitted to drinking alcohol.

Take 30 seconds to search “golf+cart+alcohol+death” in Google and you will see page after page of senseless deaths and injuries caused by golf car DUI. Each year, 15,000 people in the US require emergency care following a golf car related accident. That means that 41 people per day across the country are involved in dangerous golf car accidents that result in a trip to the ER. Most of those accidents are alcohol related. Many of the accidents involve children who were innocent passengers.

Many people still feel that since golf cars are small and slower than other vehicles on the road that its okay to drive them while intoxicated. It’s not okay. Driving under the influence is not legal anywhere in the country. Technically, it is illegal to drive your golf car on a private golf course while drinking. We know that this happens every day and police officers aren’t going to storm the golf course making arrests, but that does not change the fact that it is dangerous.

The next time you cruise around your golf car community with a cold beer in hand, think of the dangers of your actions and how they affect 15,000 people each year.

About the Author: The Owner of WHEELZ Custom Carts & Accessories, Julie Starr was one of the industry’s first online retailers of golf car products. Her eCommerce store, www.WHEELZLLC.com, has been serving golf car owners since 2008 and the store remains a popular online shopping experience for golf car owners who want to take their golf cars to the next level.

Favorite Fall Foliage Spots in the US

Pick Your Seat…Rear Golf Car Seat, That Is

Use Your Golf Car to Battle the Social Distancing Blues