The promise of hydrogen power has been largely overlooked  in the rush toward electric power, for the most part based on the promise of lithium batteries.  Given the wide range of restrictions on carbon emissions  across almost all industries, at the very least it would seem plausible to have a  back up plan, that is, an alternative to lithium batteries.

Hydrogen could well be that back-up plan.  For Michael Strizki, hydrogen is not the back-up, it is the main plan.  Mike founded Hydrogen House, a 501-C3 entity devoted to research and application of hydrogen power.  Located in Hopewell, New Jersey, Mike has a diverse set of household tools and equipment which he has running on hydrogen fuel  cells, including his lawnmower, chain saw, and other implements and tools, typically found in the garage or basement of a suburban residence.

But Mike’s  projects go well beyond the tool shed—most notably powering vehicles, such as his  motorcycle and on-road vehicle–both hydrogen-powered.  In addition, and of great interest to us in gated communities, one of his projects has  been to convert a golf car to hydrogen power.  Strizki solicited and received a grant from Mohegan Sun, a  resort located in New York State and managed by Native Americans, to retrofit a GEM golf car with a hydrogen-based power plant.

The vehicle is currently in use at Mohegan Sun, primarily, because hydrogen power is non-polluting on the interior of Mohegan Sun structures and has become something of a showpiece for management, as they ride about I the GEM, inspecting operations at the resort.

One of a kind or a prototype of commercial  production?

Could hydrogen power be widely adapted for use with personal transportation vehicles (PTVs) and golf cars?  One of the first things that comes to mind is what sort of range do you get with a fuel cell and how do you refuel?  These are obviously important questions, and trade and engineering literature is replete with cautionary notes on the limitations of a hydrogen  refueling network.  Of course, this is much the same problem faced by mass electrification of on-road vehicles.

Rather than address the broad issue of a hydrogen infrastructure, let’s focus  on whether hydrogen power is feasible with regard to PTVs operating within gated communities and on local golf courses. 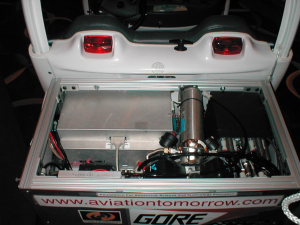 So, how is the Mohegan Sun GEM fueled and refueled?  Strizki notes that the process is relatively simple.  As noted, the vehicle is fitted with a 3 Kw fuel cell connected to the electric motor.  The hydrogen fuel comes in  a four-pound cannister under 2,500 psi, which can be easily purchased from a  commercial specialty gas provider, such as Linde.  Multiple canisters can be purchased as stored in the garage.

The refueling process requires a connection from the fuel cylinder to the tank installed in the vehicle, with a regulator to assure proper flow.  Mike stated that personnel were easily trained in the refueling process.  Once the cylinder and the vehicle tank are connected the process takes all of two minutes.  Compare this with the six-hour overnight recharging!

The range you can expect from a full tank, would be, according to Strizki, is 100-120 miles, with the usual qualifications regarding average speed and terrain.  The hydrogen cylinders cost about $14 and you can fill the vehicle tank two-to-three times.  If three times, translating to 300 miles, that works out to be approximately five-cents per mile.  That compares favorably to you 30 m.p.g. on-road vehicle, costing, say,  $2.30 per gallon, or about seven-to-eight cents per mile.  (And pollution-free.)  It should be noted that the hydrogen fuel weights only four pounds, obviously much lighter than lead acid batteries, but also lighter than a lithium battery pack.

The cost to convert your PTV to hydrogen is not peanuts.  The 3 Kw fuel cell, plus the tank and other parts will cost close to $5,000, according to Strizki, although he says a 1 Kw fuel cell should be adequate–and that would bring the cost down to around $3,000.  Strizki also noted that metal hydride  fuel cannisters are on the horizon, and once in production could well be ubiquitously available at convenience stores and dispensing machines.  (Get access to the video on STOR H from AAQiUS for the concept: http://www.aaqius.com/ ).

An alternative to commercial-grade hydrogen gas, you could generate your own hydrogen through a process called electrolysis.  This process uses electricity to separate out hydrogen from water.  The electricity he uses is sourced from solar power.  Thus, his systems a fully independent from the grid and from the local commercial  gas provider.  A prepper’s delight, indeed!

In a similar small vehicle project, Strizki has converted an off-road vehicle to hydrogen power and outfitted the vehicle with solar panel and an on-board electrolysis system, which generates electricity for the electric motor.  You may recognize the vehicle as an electric-powered Polaris Ranger.  You can watch a video of this vehicle here: https://youtu.be/Jh3BvGadEP4 .

Hydrogen is now for the early adapters

For those in the gated community, hydrogen conversions are for the early adapters.  That being said, the prognosis for hydrogen in PTVs looks reasonably good, if the efforts at upgrading the current crop of PTVs is any indicator of the energies and enthusiasm that community dwellers bring to their visions of mobility.

The Gates are Widening

Is There an UMV in Your Future?