You’ve heard of Gulf Racing. Now get ready for Golf Racing! Get it because it’s a golf cart?

As you might have noticed from the background of the header image, this is Ken Montes’s golf cart, the guy with that crazy GT40 replica I featured some time ago. Now on the surface, it looks like a regular EZ-GO golf cart but Ken is not a regular guy so you should not expect his golf cart to be run-of-the-mill either. But I’m getting ahead of myself again, I tend to do that when I’m excited. Let’s start from the beginning.

This is a 1994 EZ-GO TXT that used to belong to Ken’s dad, who used to be a USPGA instructor before he passed away two and a half years ago. This TXT is powered by a 36-volt system and he wanted a faster, 42-volt powered cart (now we know where Ken gets his love for speed). When he announced he was gonna sell this cart on Craigslist, Ken thought “hey, I could use a golf cart to putt-putt around my new neighborhood,” so it stayed in the family.

Let’s talk mods. The cart was already in Gulf livery blue so that part was already done. Ken made his own 2-inch lowering kit for it, put Excel GolfPro 205/30/12 tires on SS Voyager wheels, and cut the roof off. In the words of the wise Ken Montes, “if THEY don’t make speed parts for it, WE’LL make them.” He pulled the motor apart to learn how it works and decided to wrench on it too while he was in there. He re-machined the armature, put a new bearing in it, reshaped the brushes, cleaned the entire motor, and bigger cables for the batteries. All of these upgrades contributed to turning this aging golf course partner into a super silent and smooth cruising machine.

Those are only the mods he’s done so far; it gets crazier from here. Ken is thinking of ripping out the speed controller to ensure the whole thing doesn’t melt to the ground in an overvolting accident. The cart is currently equipped with six lead-acid batteries which weigh a lot and only have a few amp hours of drive time. Those six batteries will soon go the way of the Dodo and will be replaced with Antigravity deep cycle lithium-ion batteries. They have 1/3 the weight and three times more amp hours meaning instead of the six 6-volt lead batteries, the cart will have three 12-volt lithium batteries. MOAH POWER BABY and less weight too. Don’t look up the prices of those batteries, by the way, just trust me.

Hold on, there’s more. Now that the roof is gone, the rear end will get a spoiler for maximum downforce at the max speed of 15-or-so miles an hour. The steering column will be sliced in half and in place of the generic EZ-GO clipboard steering wheel will go the old, quick-release steering wheel from Ken’s GT40 with pedals to match. Some people have said the rear end kind of looks like the Gulf Porsche 917 because of the floating taillights over the tires so perhaps a diffuser will make its way in there?
That brings us to the end and frankly, I’m still just as in love with this thing as I was when I first saw it. Taking something ordinary and turning it into something extraordinary is a project I will always support. The best part is that doing something like this isn’t even that hard. Ken told me that when the batteries go out in these things, some retirement communities and golf clubs will just put them up for sale because they don’t want to bother buying and installing new batts. That makes these cars, and parts for them, readily available online.

I can’t wait to see this thing at car events in the future. McLaren who? Lamborghini what? Nah fam, Gulf Golf Cart for the win. 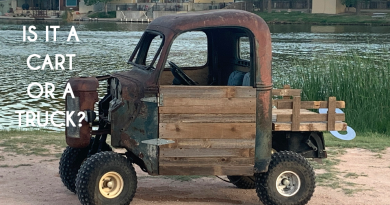 Is It A Cart Or A Truck? 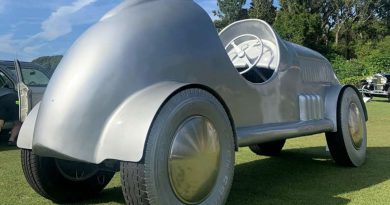 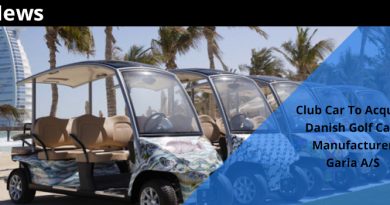