Sales of personal transportation vehicles (PTVs) and light duty utility vehicles (LDUs) are now well beyond the golf-centric market.  These two categories of vehicles, historically and even currently, are associated with golf car manufacturers.  Most of the current models are still designed in such a way as to reveal their roots in golf car-type vehicles.

Despite appearances what is going on “under the hood” speaks to the emerging markets in urban/suburban mobility and last-mile delivery systems.

In the USM market factors driving change include an emphasis on “taking back the streets”, which envisions a sort of throwback to earlier days when neighborhood streets were packed with pedestrians doing their shopping, vending, or simply saying good morning to people one saw every day.  In the modern world, this translates to drastically reducing the use of conventional on road vehicles, using instead bikes, scooters, skateboards, and shoe leather, as in just plain walking.

In less densely populated areas including suburban neighborhoods and planned municipalities, such as gated communities, dealers report more frequent use of PTVs and greater demand for low-speed vehicles.  Based on local regulations, a personal transportation vehicle that is LSV qualified need not be licensed, but is favored by consumers for its faster speed and safety features.

Aspects of inclusion and equity

Often cited as a policy objective is the need to achieve broader access to alternative forms of transportation in underserved communities and demographics.  In achieving this objective, it is likely that the market will see:

Trend toward all-season use of alternative vehicles

The shift toward alternative personal transportation solutions strongly suggests that ride-sharing and fleet vehicles will need to be equipped with features which support comfort and safety in all weather conditions.

The USM market should see significant growth over the next five years and become considerably less golf-centric.  As the market becomes a more generic urban/suburban mobility market, an important question is whether PTVs and the companies currently producing them will become significant players.

In the LMDS market the key factor driving change is the on-going transformation of the distribution system throughout the United States market.  This transformation is, in turn, driven by:

Contrast in point to point and hub and spoke distribution designs.

The combination of the above factors represents a fundamental  change is shopping habits and delivery options.  With the addition of internet-based communications impacting home and business communication—and the compounding influence of health measures brought on by the COVID pandemic—the stage is more than set for the further transformation of living styles; i.e., a dispersed living style which promotes a healthier, less polluting environment.

What vehicle types are likely in a dispersed living style?

From golf car manufacturers, a vehicle with great potential would be the Club Car Current.  Other prospective vehicles might be the Club Car Carryall, E-Z-GO Hauler, and the Yamaha UMax.  The Current, however, is specially manufactured and designed for the LMDS market.  According to a Club Car official, the vehicle is undergoing test trials in undisclosed locations.

Emphasizing the point with regard to diversity of vehicles, DHL and others have initiated last-mile delivery services using e-bikes or e-cargo vehicles.  Some of these vehicles are three-wheelers and others, four-wheelers.  Whether the optimal design is a Current-type vehicle, or an e-cargo three-wheeler would largely depend on local conditions, as well as proximity of a spoke distribution facility, relative to the neighborhood served. 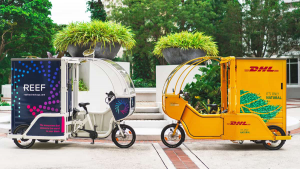 In addition, major automotive manufacturers are entering the market, with somewhat larger vehicles.  So, the question is, will the LMDS market support the diversity of vehicle solutions that are emerging, or yet to emerge?

The answer lies in the market itself.  Adam Smith in the Wealth of Nations observed two and one-half centuries ago that it was the extent of the market that incentivized specialization and greater efficiency.  As the LMDS market grows specialization grows apace in all aspects that feed into it:  the brick and mortar of warehouses, tracking software, automated systems, a host of other technologies, and, of course, the vehicles that do the last mile delivery.

Thus, it is quite likely that a considerable variety of vehicles will be employed in the task of last mile delivery.  Vehicle specialization is, and will be, greatly influenced by the type of product delivered.  The vehicle delivering food products is unlikely to be the same type as the one delivering white goods.  On the other hand, vehicles capable of delivering a wide variety of products in diverse operating environments will enjoy the greatest level and growth of sales.

Among the major golf car manufacturers the Club Car Current best fits the rule of diverse product delivery in varied operating environments.  This model, pictured to the right, is fully-enclosed for all weather comfort and can be fitted out to handle a wide variety of cargo.

While the USM and LMDS markets offer significant growth potential in the coming years, there are also significant risks in the outlook.  The U.S. economy, as well as the global economy, is locked in the throes of a supply chain crunch.  This crunch is characterized by a massive disequilibrium in the marketplace with demand greatly exceeding supply.

Left alone freely operating markets will, over time, adjust to restore market equilibrium.  Interfered with, this process of adjustment is only prolonged and can, potentially, be rendered immobile.  Risks of this nature arise from two sources:

It is not as well known that Keynes also wrote a paper shortly after the end of World War I, in which he predicted that the reparations demanded of Germany by France and Great Britain would lead to a second war.  He resigned his position on the commission overseeing the Treaty of Versailles in protest, and history is a testimony to his insight and brilliance.

The ghost of Keynes hovers over the U.S. economy issuing a similar warning.

What Does The Market Data Show?

The Future is Now for Club Car and Polaris