Looking forward in 2022 and into 2023 owners of PTVs and prospective owners must be calculating the costs of ownership, including a purchase or possible upgrades, as well as day-to-day running costs. With gasoline prices moving ever higher, that alone suggests a favoring of more intensive use.

Officials grapple with growing use of PTVs

A typical definition and set of rules at the local level can be seen in the following excerpt from a town council meeting in Holmes Beach, Florida:

A vehicle defined as a golf cart in Holmes Beach does not require a license plate. A low-speed vehicle can look like a golf cart, one of the mini-cars rented on the Island or other street-legal, non-traditional vehicles. These have license plates and can be driven in all three Island cities, except that they cannot be legally driven on state roads, including Manatee Avenue and East Bay Drive in Holmes Beach, although the vehicles can cross these streets. Because they are not supposed to be driven on Manatee Avenue, they should not be driven across the Anna Maria Island Bridge.

Note first the distinction between golf carts and low-speed vehicles. The latter need license plates and are actually described, along with other vehicles, as being in a class of “street-legal, non-traditional vehicles.”

Next, the precise roads where LSVs can operate are described, which in this case include “…all three island cities…”, but cannot be driven on state roads, which are named in the discussion. This precise description of what you can and cannot do when driving a PTV is typical of the discussion in hundreds of communities across the country. Such local regulations cover municipal areas usually outside of individual gated communities which are likely to have their own set of rules.

Safety is an on-going concern

In the same council discussion, Holmes Beach Police Chief, Bill Tokajer stated that his concerns about golf carts and low-speed vehicles “…primarily include safety and speed.” He also added, “The slower-moving vehicles on main roads, such as Marina Drive, which has a 35 mph speed limit in some places, can cause issues for car and truck drivers because the lower-speed vehicle slows traffic down.”

Tokajer also worried about LSVs driving in the bicycle lanes to allow cars to pass, but which could result in collisions and injuries to cyclists.

Perhaps the most important thing to note is the multiplicity of vehicles involved, all of which have their advocates and supporters. These complexities are a challenge to city officials attempting to cope with the situation.

The next big upgrade

While the current LSV models have passive safety components (seat belts, turn signals, front and back lights, etc.), which are required for certification, the next improvement in safety will be proactive devices such as front end collision warnings and avoidance (automatic braking), lane correction, and blind spot warning. 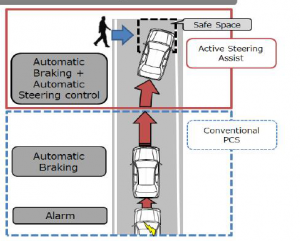 The illustration to the left indicates how Level 2 autonomy works. The key feature of this degree of autonomy is that sensory devices which pick up the presence of obstacles (e.g. another vehicle or a pedestrian) translate the electronic signals generated by the sensory device into commands that result in a physical reaction without the intervention of the driver.

A step back from Level 2 would be to simply generate warning signals, which the driver would then take appropriate steps to avoid a collision or hitting a pedestrian. Most current model conventional automobiles have such features.

What’s next for the PTV/LSV market?

Given the increasing sophistication of golf car-type vehicles in terms of comfort, style, and performance, plus with new added proactive safety systems, the market for these vehicles is very likely be welcomed by consumers. More and more consumers for their part, have come to look at personal transportation vehicles as a desirable alternative to the conventional automobile in short-distance point A to point B mobility.

Other things equal, such conditions would suggest rapid growth of the market over he next 3-5 years and beyond. By the end of the decade it would not be unduly optimistic to see close to a million units come to market. Things are rarely equal, however, and the current period, end of the first quarter of 2022, is witness to crucial uncertainties, none of which carry the promise of early resolution.
Uncertainties abound

The uncertainties are familiar to most, whether they be consumers or manufacturers:

These issues, the outcomes of which at this time are quite unpredictable, cloud the forecast. The following assumptions are reasonable, however, if hardly assured:

There is already a great deal of unmet demand for PTVs which manufacturers and imports must meet and fulfill. This alone would add 6%-7% of growth over 2021. Over and above this, the growing popularity of PTVs as an alternative to conventional on road automobiles should add another 5%-6% of growth to the market. High single-digit growth over the next four or five years after 2022 is a strong possibility.

The market in coming years will see much greater competition. It will no longer be dominated by the Big Three—Club Car, E-Z-GO, Yamaha—but will see strong competition from the likes of StarEV, ICON, and Evolution. And these are no longer cheap knock-offs of Big Three models, but rather quite sophisticated, stylish vehicles. Tomberlin, more identified as a U.S.-based company is also aggressively building its market share.

The evidence of growing competition is very clear: In 2021, imports of golf car-type vehicles, 90%+ from China more than doubled to over 60,000 units, according to U.S. Department of Commerce trade figures.

The bottom line is that consumers will have more product to choose from at competitive prices. Always a good thing.

What Happened to Hybrid Drives

What to Watch for in Golf Car-Type Vehicles in 2022: On-Going Demographic and Technological Changes Will Drive a New Market

Sometimes Government Can Play a Positive Role in Market Development